Travelers to the center of life

Travelers to the center of life

How far can a journey take you? How many new sights, sounds, and sensations can you absorb, when you open your eyes and remove the barriers of your mind? What happens to your heart when a playful green turtle looks you in the eye, or when lightning puts on a spectacular show for you in a burning sunset sky? Do you fret for the spent oceans, as humans take far beyond what they need for profit as well as for survival, only to find joy again when people truly learn to respect nature and protect it for their children? Did you come here only to see, but find yourself blessed with an unexpected gift—the gift of feeling and hoping and dreaming along with all that you meet?

For Jürgen Freund and Stella Chiu-Freund, wildlife and underwater photographers, chroniclers of nature, married couple, and traveling companions on many adventures in the natural world, the gifts have been too numerous to count—and this latest and greatest odyssey has been the mother lode of them all.

In 2009, the Freunds, collectively known as freundfactory and long-time collaborators of the Worldwide Fund for Nature (WWF), were commissioned by the environmental organization to travel through the six countries in the Coral Triangle on an unprecedented photographic expedition, to capture images from this hotbed of marine biodiversity to show to the world.

“It was an incredible opportunity,” Stella Freund says “to be able to visit and photograph places in Southeast Asia and the Pacific at the center of marine and cultural biodiversity, is a dream come true”.

The couple embarked on what was to be an 18-month expedition that took them to the Philippines, Malaysia, Indonesia, Papua New Guinea, the Solomon Islands, and Timor Leste, an itinerary that was “utter madness,” Stella said. They hopped from beachside thatched-roof huts to five-star air-conditioned live-aboard boats, capturing life in tiny, remote fishing villages and documenting million-dollar live reef fish operations. There were local weddings, town festivals, and they hitched rides on fishing boats catching every kind of fish, in every kind of place. There were fishermen, conservation workers, progressive resort owners, park rangers, and ordinary people extending extraordinary welcomes. And beneath the water, the Coral Triangle truly came alive, as the Freunds encountered the breathtaking creatures that call these waters home and make it a true wonder of biodiversity, from brilliantly-colored nudibranchs and deadly thumb-sized blue ring octopuses, to gentle whale sharks as large as vans and magnificent mantas with wing spans wide enough to embrace them both.

To be sure, the images have not always been happy, and the Freunds have gone through the gamut of emotions. The exhilaration of a perfect photograph came only after punishing hours, exhausting travels, and the backbreaking work of lugging 120 kilograms of camera and dive gear to some of the most remote or poorest places in the world. Even as they happily chased mating turtles in the nesting and breeding haven of Sipadan, Malaysia, they could only watch in despair as a magnificent leatherback was speared and slaughtered before their eyes in Kei, Maluku.

Yet, every image was still somehow beautiful in its own way, and it is the Freunds’ hope that a message of urgency can be communicated along with the message of hope in this, their chronicle of experiences. “We look in the face of destruction, and feel an overwhelming sadness,” Stella says. “But it’s our zeal to create pictures that can make a difference that keeps us going.”

“Our marriage works because Yogi and I have the same values ... we love all living things—insect, plants, fish, marine mammals. We have full respect for nature. My working background was also in perfect sync with his job as a nature photographer. So we can survive being together all the time, and never be bored with each other. After nine years of marriage, it’s been the same from day one.”

The couple was seemingly destined for life in the wild. Jürgen, known to family and friends as Yogi, is originally from Dortmund, Germany, and was a mechanical engineer who taught himself how to take pictures. This, despite a self-made explosive accident in his youth that left him blind in one eye; it is a true marvel of serendipity and fate that Yogi’s remaining good eye would see things that few others ever could. Growing up, he was greatly influenced by the work of underwater pioneers Hans Haas and Jacques Cousteau, as well as by his brother Winnfried, then a medical student, who got Yogi interested in biology and gave him his first SLR camera.

Soon after he learned to scuba-dive in the cold lakes of Germany and shoot underwater photographs, he published his first story about diving in the Philippines for Aquanaut Magazine in the early 1990’s. He was then still employed as an industrial photographer for MTU, a turbine engine company based in Munich. Yogi realized he was a wanderer at heart who felt trapped in noisy urban settings. He also found engineering “too restricting and uncreative,” although the knowledge serves him well today, as he is endlessly tinkering with his gadgets. In 1995, he would eventually answer what he likes to think of as “the call of the sea,” and began traveling and taking photographs professionally. Soon he was reaping awards for his work, including the pictures that took him back to the Philippines, where he eventually met Stella: images of a whale shark hunt on Pamilacan Island in Bohol, Philippines. Yogi’s iconic shot of a fisherman plunging a huge metal hook into the skull of a whale shark that would feed the entire village won him a prestigious World Press Photo Award for Photojournalism in 1999.

Stella is a Chinese-Filipino born and raised in Manila; her father had immigrated to the Philippines from Canton, China in his teens. Educated at a Jesuit university, she grew up exposed to many influences, but she also loved the sea and the outdoors, and learned to scuba-dive to be able to give directions to the underwater film crew during the production of a documentary she was producing Resource at Risk: Philippines Coral Reefs. She initially worked in advertising industry and moved on as documentary producer, working on several short environmental and cultural documentary films, including the acclaimed Jose Rizal: Ang Buhay ng Isang Bayani (The Life of a Hero), a film on the Philippines’ national hero, as well as documentaries on ecotourism, tribal weavers, and coral reefs. Early on, her penchant for organization was already apparent, as a producer’s job meant taking care of the myriad details before an actual shoot—a portent of things to come, perhaps?

It was in 1999 that Stella and Yogi met; she was 34, and he was 39. He was already a widely published nature photographer, and she was a freelance producer tasked with buying some of his photographs for an environmental campaign for a big Filipino company. Yogi relocated to Manila in December of 1999, and they were married in Germany in 2000.

The adventures began soon after. A year after they were married, the couple traversed the Sulu-Sulawesi marine ecoregion and published the award-winning book Sulu-Sulawesi Seas in collaboration with WWF Philippines and Bookmark, what has been widely considered the definitive coverage of the marine life, livelihood, and environmental threats in the area.

“We decided it was mutually beneficial for us to work together,” says Stella, who often speaks for the two of them. “We genuinely like each other's company, and never stop talking about anything and everything!” The two complement each other perfectly, virtually reading each other’s minds and gestures, whether they’re clambering up rocks to get a good view, setting up an underwater picture (with Yogi directing and Stella posing, or getting other people in the picture to pose), or deciding where to get a good dinner and Yogi’s mandatory beer in a small town in the middle of nowhere. “Our marriage works because Yogi and I have the same values,” Stella says. “We love all living things—insect, plants, fish, marine mammals. We have full respect for nature. My working background was also in perfect sync with his job as a nature photographer. So we can survive being together all the time, and never be bored with each other. After nine years of marriage, it’s been the same from day one.”

In 2003, in search of more wildlife to photograph, they immigrated from Manila to Cairns, Australia, which they now call home. Since then, they have been published in several environmental magazines in Asia as well as Europe. From this home base, they can easily load their van with supplies and equipment, and go on the road for weeks, shooting snakes, crocodiles, insects, or whales, among their many assignments. “We are light on our feet, and we like to be low-key and somehow disappear into the scene to let the scene unfold,” Stella says. “After all, it’s what’s real that makes the best and most beautiful pictures.”

Aside from the sheer abundance of life, it was the goodness of heart of the people of the Coral Triangle that made the expedition truly unforgettable for the Freunds. “Humanity and generosity are understood everywhere,” Yogi likes to say. It certainly made the hunt for the perfect image of the remarkable Coral Triangle all the more rewarding. “Ultimately, what we see and photograph is a mystery, always,” Stella says. “We get surprised, and of course, sometimes we get disappointed. But every day, we’re grateful for the opportunity to do what we do, because this is what we do best.”

WRITTEN BY Alya B. Honasan

This article is adapted from the Coral Triangle book, with permission from the Freunds 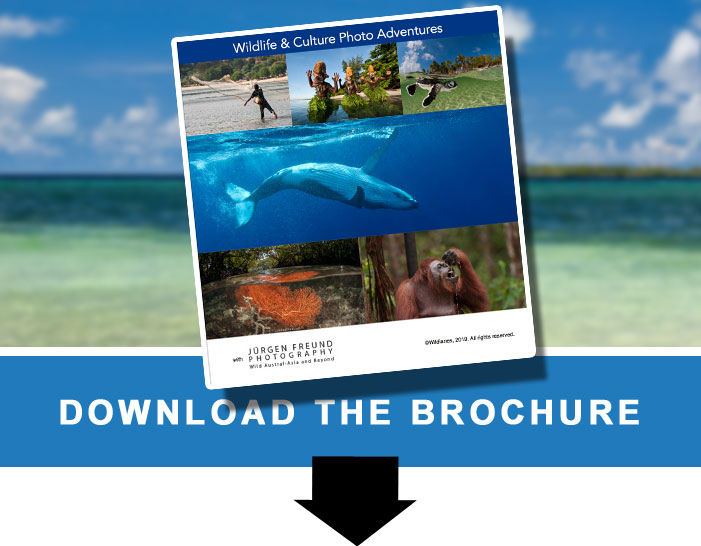