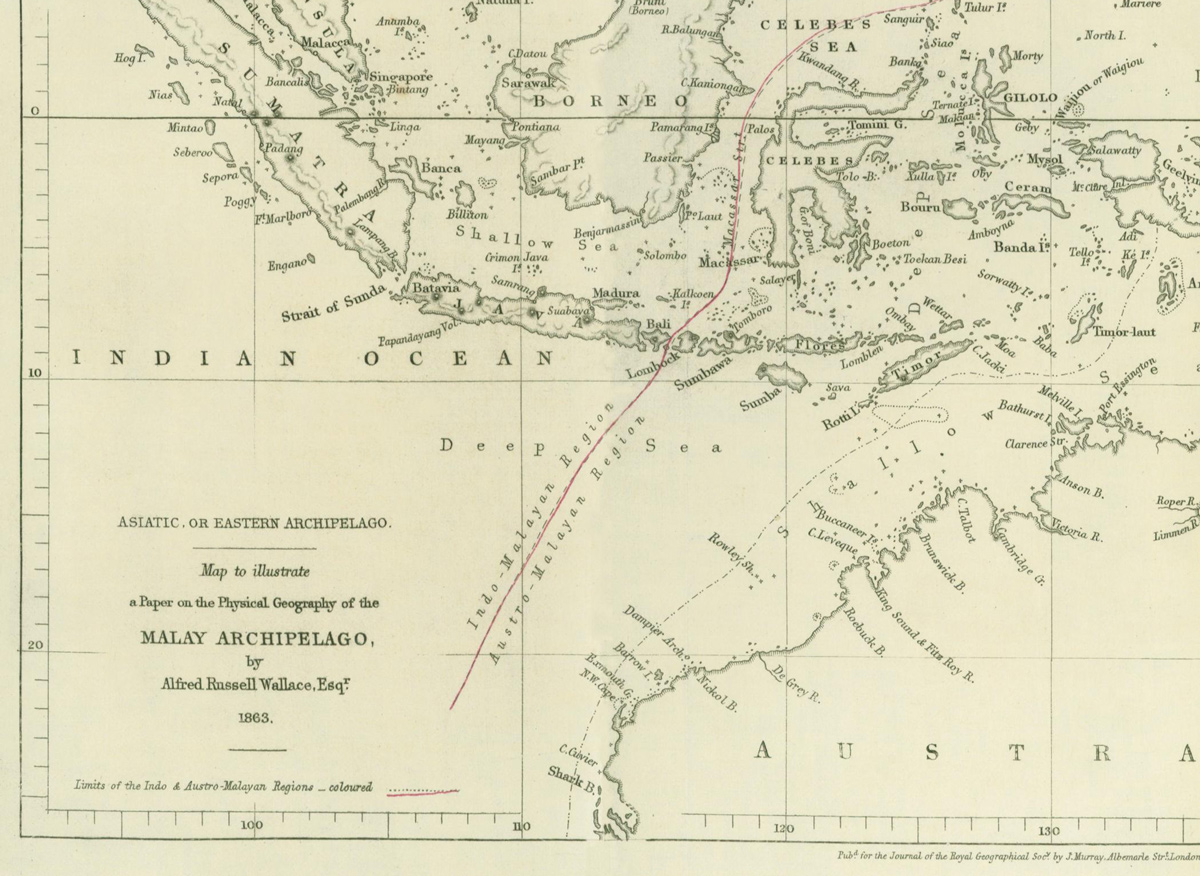 Barely 40 kilometres separate the islands of Bali and Lombok,  yet they mark the invisible boundary between two geographic domains, first described in 1859 by revered explorer and Darwin luminary, Alfred Russell Wallace. He believed “the western part to be a separated portion of continental Asia, the eastern the fragmentary prolongation of a former pacific continent”

Wallace saw that Indonesia’s 17,000 or so islands were a melting pot for evolutionary biology.

Millions of years ago, the continents of Asia and Australasia were joined together. Australia’s Superb Lyrebird is a relic of the bird from which all the world’s song birds evolved. Long after the continents drifted apart though, glaciation events during the Pleistocene plunged a third of the planet under ice. Sea levels dropped markedly and land-bridges formed between islands - Tasmania  was joined to mainland Australia at this time.

But the Lombok Strait that separates Lombok and Bali, is over 250m deep, so the islands remained apart. This allowed Australian fauna to colonise to Lombok from the east and Asian fauna to Bali from the west.

Today on Lombok, as in Wallace’s notes from the 1800s, Australians would be familiar with many of the birds that occur: Zebra Finches, Cockatoos and Honeyeaters. Further east and you enter the realms of the birds of paradise, several species of which, occur in far north Queensland.

To the west, the bird fauna is different. Woodpeckers mostly reach Bali but no further. Contrary to popular belief, most birds don’t disperse well over open water (out of interest, the three species of British woodpeckers don’t occur in Ireland for the same reason).   

Wallace, Alfred Russel - On the Physical Geography of the Malay Archipelago. The original drawing of the 'Wallace Line' showing the division between Asian and Australasian flora and fauna.

Wallace traversed Indonesia from April 1854 to April 1862 documenting its wild flowers and butterflies. His work provided valuable evidence on which Darwin finally published his theories. Wallace was able to clearly discern the historic separation of islands by observing nature around him. His understanding of diversity in nature, also mirrored his experiences with culture.

In 1823 he said “I am thankful I can see much to admire in all religions”. Still today, Indonesia has 300 ethnic groups and six major religions. Observing nature means understanding the meaning of things. A knowledge of wildlife is enlightening and its loss, even in the 1800s, was a concern to a man who had learnt and appreciated so much of the world, through observation of nature.

With one of the earliest statements for conservation, Wallace lamented “future ages will certainly look back upon us as a people so immersed in the pursuit of wealth as to be blind to higher considerations” and that “civilisation has ever accompanied emigration and conquest - the conflict of opinion, of religion, or of race”.

By the early 19th century, the Dutch colonial government on Sumatra had initiated the transmigration program. Indonesia gained independence shortly after the war and the policy was revived much later, with the help of the World Bank, to reduce pressure on the most densely populated islands and move people elsewhere. Taking naturally-occurring culture, that’s evolved in the same way as nature over millennia, and manufacturing new cultures, is what creates conflict.

The transmigration phenomenon only ended in 2015 but it has increased the burden on heavily deforested areas including Sulawesi, a remarkable and diverse island that’s dominated by volcanoes in the north and stunning limestone scenery in the south.

Sulawesi is home to a rare and extraordinarily unique animal that is still quite easy to see with guidance. It’s a species that Wallace would have hoped to survive our pursuits.

The Bear Cuscus is charming but rare species that can be seen quite easily in the mountains of northern Sulawesi.

It’s by far the furthest north-western-living marsupial in the world and occurs exclusively on Sulawesi and nearby islands. Its ancestors would have to have separated from mainland Australia about 20 million years ago.

It nurtures its young in a pouch like a kangaroo but has a prehensile tail like a monkey. It’s confused appearance has led to it being referred to locally as the ‘marsupial monkey’. It feeds during the day on vegetation near the canopy of rainforest trees and is large - it weighs in at about 7kg and with its tail, is a good metre or so in length. It’s similar in size to the Australian Tree Kangaroos.

It’s rewarding, as an Australia, to travel the islands of Indonesia and see things that are familiar from home. If nothing else, it reminds us that we share a common ancestry with our nearest neighbours.